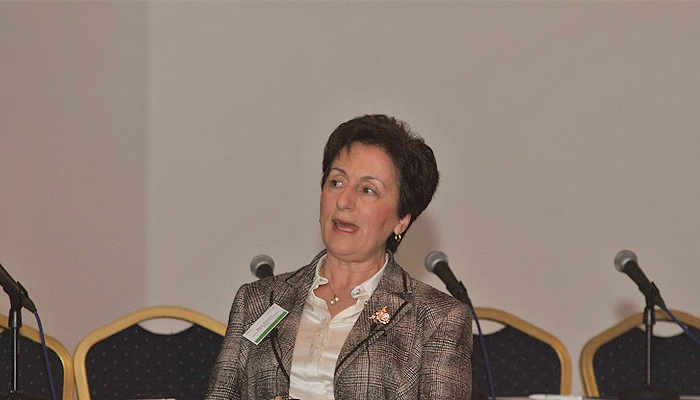 One of the most important issues in cloud computing is the effective scheduling of real-time complex applications, taking into account not only the processing times but also the energy consumption related cost for the cloud provider. Therefore, energy efficient scheduling algorithms are required while meeting deadlines.

In this talk we will present state-of-the-art research covering various concepts on real-time parallel jobs scheduling in the cloud and we will provide trends and directions in the cloud computing area.

Helen Karatza is a Professor Emeritus in the Department of Informatics at the Aristotle University of Thessaloniki, Greece, where she teaches courses in the postgraduate and undergraduate level, and supervises doctoral and postdoctoral research. Dr. Karatza's research interests include Computer Systems Modeling and Simulation, Performance Evaluation, Grid and Cloud Computing, Energy Efficiency in Large Scale Distributed Systems, Resource Allocation and Scheduling and Real-time Distributed Systems.

Dr. Karatza has authored or co-authored 220 technical papers and book chapters including five papers that earned best paper awards at international conferences. She is senior member of IEEE, ACM and SCS, and she served as an elected member of the Board of Directors at Large of the Society for Modeling and Simulation International. She served as Chair and Keynote Speaker in International Conferences.

Dr. Karatza is the Editor-in-Chief of the Elsevier Journal “Simulation Modeling Practice and Theory” and Senior Associate Editor of the “Journal of Systems and Software” of Elsevier. She was Editor-in-Chief of “Simulation Transactions of The Society for Modeling and Simulation International” and Associate Editor of “ACM Transactions on Modeling and Computer Simulation”. She served as Guest Editor of Special Issues in International Journals. More info about her activities/publications can be found in http://agent.csd.auth.gr/~karatza/ 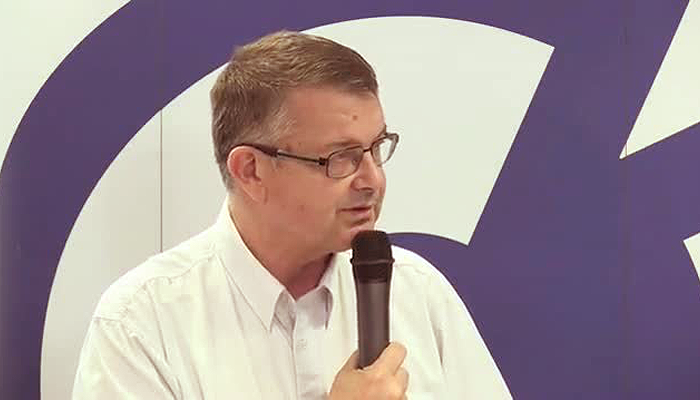 From IoT to AI

The presentation will recap on some current approaches for deploying IoT using pragmatic architecture. It will introduce new improvement towards advanced semantic and context aware management which will be needed for providing Artificial Intelligence solutions. Some use cases will be presented in the domains of water and aquaculture.

CEO and founder at eglobalmark

32 years of rich and diverse professional experience in ICT including many years in R&D, at top management level of private companies and few years with a broad insight into Information Communication Technology (ICT) at the European policy-making level (e.g. European Commission, EOTC) 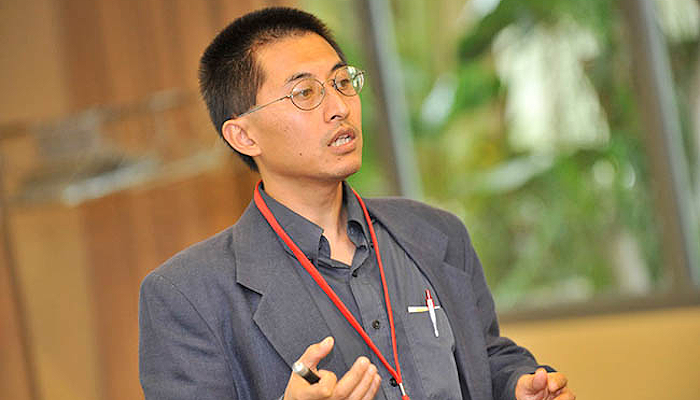 Recent Low-Power Wide Area Networks (LPWAN) introduced by Sigfox and Semtech are currently gaining incredible interest and are under intense deployment campaigns worldwide. These technologies are mostly simple ALOHA systems with well-known performance limitations. Moreover, due to the extremely low throughput of these long-range technologies, the time-on-air of message can be very large, typically in the range of several seconds, thus dramatically increasing the probability of packet error and collisions. Given the incredible worldwide uptake of LPWAN networks for a large variety of innovative IoT applications, including multimedia sensors, it is important to understand the challenges behind large scale and dense LPWAN deployment, especially because both Sigfox and LoRa networks are currently deployed in unlicensed bands. This talk has a particular focus on LoRa technology as it can be deployed in a private and ad-hoc manner, making community-based deployments possible. In the presention we will review the main LoRa/LoRaWAN characteristics and will then discuss about LoRa/LoRaWAN network scalability in relation with unlicensed band regulations, interferences and various interference mitigation techniques, challenges behind channel access mechanism and reliability of Clear Channel Assessment in these LPWAN networks. The presentation will end with discussions on whether LoRa networks can scale to dense deployment scenarios or not.

Dr Congduc Pham is a Professor of Computer Science at the University of Pau (France) in the LIUPPA laboratory in which is served as director from 2006 to 2009. He obtained his Ph.D in Computer Science in 1997 at the LIP6 Laboratory (Laboratoire d’Informatique de Paris 6), University Pierre and Marie Curie. He also received his Habilitation in 2003 from University Claude Bernard Lyon 1. From 1998 to 2005, he was associate professor at the university of Lyon. His current research interests include sensor networking, Internet of Thing, congestion control and QoS for grid/cloud computing. He served as Guest Editor for Future Generation Computer System, Annals of Telecom and International Journal of Distributed Sensor Networks. He serves as Program Vice-Chair for IEEE GreenCom 2010, workshop Co-Chair for IEEE WiMob 2011, Track Chair for IEEE WiMob 2015 and General Chair for GECON 2017. He has published more than 140 papers in international conferences and journals. He is currently highly involved in WAZIUP and WAZIHUB EU H2020 projects to deploy low-cost IoT in Africa. He is also consulting in the domain of network performance and wireless sensor networks. 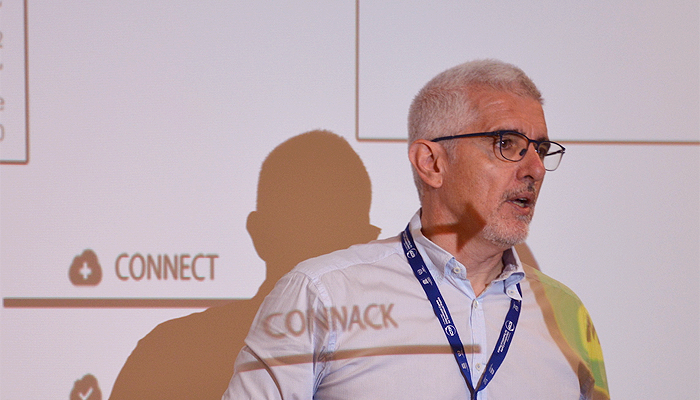 Towards a Scaled IoT Pub/Sub Architecture for 5G Networks

The vision of the Internet of Thing is becoming a reality and novel communications technologies such as the upcoming 5G network architecture are designed to support its full deployment. This keynote concentrates on this scenario and discusses the benefits that a publish/subscribe protocol such as MQTT or its recently proposed enhancement MQTT+ could bring into the picture. However, deploying pub/sub brokers with advanced caching and aggregation functionalities in a distributed fashion poses challenges in protocol design and management of communication resources. The keynote will present the main research challenges and possible solutions to scale up a pub/sub architecture for upcoming IoT applications in 5G networks, and present a perspective on systems design, optimisation, and working implementations.

He is currently a full professor of computer engineering at the "Universitat Politècnica de València", Spain. His research activity is focussed on networking and mobile systems for the Internet of Things especially in the context of Community Networks and Intelligent Transport Systems (ITS).

He is the coordinator of the Computer Networks Research Group (GRC) of the Department of Computer Engineering. He is a senior member of the IEEE. 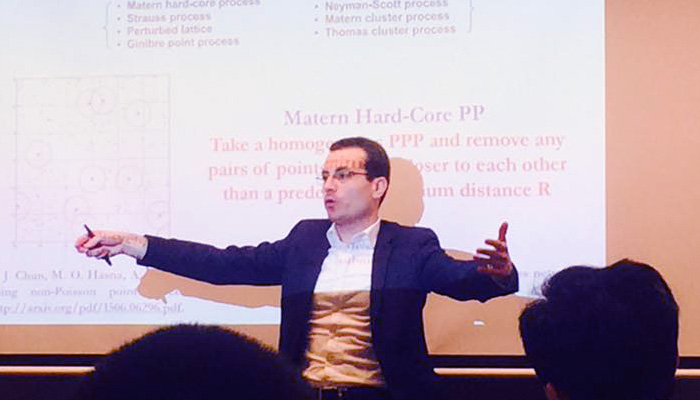 Future wireless networks are expected be more than allowing people, mobile devices, and objects to communicate with each other. Future wireless networks will constitute a distributed intelligent communications, sensing, and computing platform. Small cells, Massive MIMO, millimeter-wave communications are three fundamental approaches to meet the requirements of 5G wireless networks. Their advantages are undeniable. The question is, however, whether these technologies will be sufficient to meet the requirements of future wireless networks that integrate communications, sensing, and computing in a single platform. Wireless networks, in addition, are rapidly evolving towards a software-defined design paradigm, where every part of the network can be configured and controlled via software. In this optimization process, however, the wireless environment remains an uncontrollable factor: It remains unaware of the communication process undergoing within it. Apart from being uncontrollable, the environment has a negative effect on the communication efficiency: signal attenuation limits the network connectivity, multi-path propagation results in fading phenomena, reflections and refractions from objects are a source of uncontrollable interference. In the recent period, a brand-new technology, which is referred to as Reconfigurable Intelligent Surfaces (RISs), was brought to the attention of the wireless community. The wireless future that can be envisioned by using this technology consists of coating every environmental object with man-made reconfigurable surfaces of electromagnetic material (software-defined reconfigurable metasurfaces) that are electronically controlled with integrated electronics and wireless communications. In contrast to any other technology currently being used in wireless networks, the distinctive characteristic of the RISs consists of making the environment fully controllable by the telecommunication operators, by allowing them to shape and control the electromagnetic response of the objects distributed throughout the network. The RISs are a promising but little understood technology that has the potential of fundamentally changing how wireless networks are designed today. In this talk, we will discuss the potential of RIS in 6G wireless networks, and the need of AI for their optimization.

Marco Di Renzo was born in L'Aquila, Italy, in 1978. He received the Laurea (cum laude) and Ph.D. degrees in electrical engineering from the University of L'Aquila, Italy, in 2003 and 2007, respectively, and the Habilitation à Diriger des Recherches (Doctor of Science) degree from University Paris-Sud, France, in 2013. Since 2010, he has been a Chargé de Recherche CNRS (CNRS Associate Professor) in the Laboratory of Signals and Systems (L2S) of Paris-Saclay University - CNRS, CentraleSupélec, Univ Paris Sud, Paris, France. He serves as the Associate Editor-in-Chief of IEEE Communications Letters, and as an Editor of IEEE Transactions on Communications, and IEEE Transactions on Wireless Communications. He is a Distinguished Lecturer of the IEEE Vehicular Technology Society and IEEE Communications Society, and a Senior Member of the IEEE. He is a recipient of several awards, including the 2013 IEEE-COMSOC Best Young Researcher Award for Europe, Middle East and Africa, the 2013 NoE-NEWCOM# Best Paper Award, the 2014-2015 Royal Academy of Engineering Distinguished Visiting Fellowship, the 2015 IEEE Jack Neubauer Memorial Best System Paper Award, the 2015-2018 CNRS Award for Excellence in Research and Ph.D. Supervision, the 2016 MSCA Global Fellowship (declined), the 2017 SEE-IEEE Alain Glavieux Award, the 2018 IEEE-COMSOC Young Professional in Academia Award, and 7 Best Paper Awards at IEEE conferences (2012 and 2014 IEEE CAMAD, 2013 IEEE VTC-Fall, 2014 IEEE ATC, 2015 IEEE ComManTel, 2017 IEEE SigTelCom, EAI 2018 INISCOM, IEEE ICC 2019).